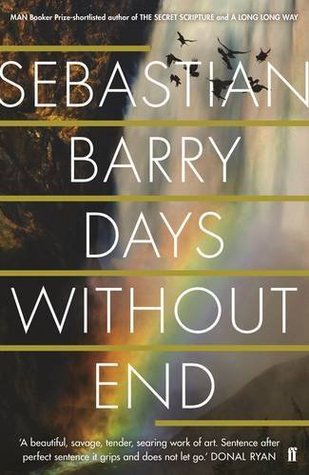 It is difficult to know where to begin with such an exceptional novel. Days Without End, the 2016 Costa Book of the Year award winner, continues the success of celebrated Irish author Sebastian Barry.

This is part of his series dedicated to charting the fictional lives of two Irish families; the Dunnes and the McNulty’s. This book can be read alone. It is the first novel by Barry that I have read and he has been added to my list of authors to catch up on. Within the first few pages one realises why this is such a feted novel. Days Without End is narrated by Thomas McNulty, a Sligo born American, who finds himself caught up in the shifting landscape of the birth of modern America. He experiences the wars with Native Americans and then the Civil War. In between all of this he flees the Great Famine, finds his soulmate, dances with miners, graces the stage and raises a family of his own before going back out to live the life of a soldier. His thoughts on what it is to be a soldier are fascinating.

“We’re strange people, soldiers stuck out in wars. We ain’t saying no laws in Washington. We ain’t walking on yon great lawns. Storms kill us, and battles, and the earth closes over and no one need say a word and I don’t believe we mind. Happy to breathe because we seen terror and horror and then for a while they ain’t in dominion. Bibles weren’t wrote for us nor any books. We ain’t maybe what people do call human since we ain’t partaking of that bread of heaven. But if God was trying to make an excuse for us He might point at that strange love between us”.

McNulty’s voice feels natural and believable providing the route into his thoughts and feelings. The novel does require some concentration as the language flows from McNulty’s mouth and mind. This carries the reader along but it also means that this is not a book that can be easily picked up and then put down again. Instead each chapter has to be consumed whole. It is through McNulty’s voice that Barry gets deep into the skin of McNulty, and through him into the forming body of a new nation.

“Time was not something then we thought of as an item that possessed an ending, but something that would go on forever, all rested and stopped in that moment. Hard to say what I mean by that. You look back at all the endless years when you never had that thought. I am doing that now as I write these words in Tennessee. I am thinking of the days without end of my life. And it is not like that now.” From these lines one can glimpse at how the language moves from the earthy reality of soldiering to philosophical moments captured between battles; in nights spent freezing and starving.

McNulty has an attitude informed by his early childhood in Sligo. The moments that touch on his life during The Famine and emigration are harrowing and make the past feel as though it can be touched. He tries not the think back on The Famine or the ship where he was “worth nothing”. The silence around the Irish in America, and the way in which they start to define themselves as American, speaks volumes about the horrors that had been left behind in Ireland. “In the army you meet a dozen men a month came from Ireland but you never hear them talk about it much. You know a Irishman because he has it writ all over him”. The reader learns that McNulty lost most of his family, watching them starve to death without hope or dignity. He travels by coffin ship to Canada where he and his fellow refugees are held in quarantine. The short description of this is powerful and sticks in the throat. After such tragedy he holds close any scraps of happiness, softness and love are available in such an inhospitable world. This imbues the narrative with a sense of awe and wonder.

Those who have already read this book will have noticed one glaring omission from this review. There is a love story, a friendship, that runs throughout Days Without End. It is delicately written and quietly beautiful. I am very keen not to spoil it for other readers. Many other reviews such as Harriet at Shiny New Books have touched up this while also investigating the ideas of personal identity that play an important role in the novel. For those who are interested in reading further on the subject here is an article from The Guardian, which although not specifically about Days Without End, is still worth reading. Personal and national identity, formulation and actualisation are timely topics. Importantly they feel natural, not as though they have been shoehorned in. This is also important when it comes to the representation of Winona, a young Native American girl who becomes a significant part of McNulty’s story.

Days Without End also has the feeling of a Western. Alongside the Irish trying to make their way in this new country early in the novel are clashes between Native Americans and the frontiersmen trying to branch out and control this new, often hostile and threatening terrain. The interactions between these two groups are frequently horrific and deceitful. “There were stories everywhere of rapes and robberies and sudden and vicious visits on out-of-the-way premises. Unless you were a witness how could you that what was true”. With the benefit of history however the reader knows not only the fate of the Native American tribes but also that this conflict will soon be usurped by another; the Civil War.

The novel is frequently very violent yet is line by line with a soft dreamlike quality that makes this such an unusual novel. Days Without End is surely one of the best novels of the year and deserving of a place on every bookshelf.