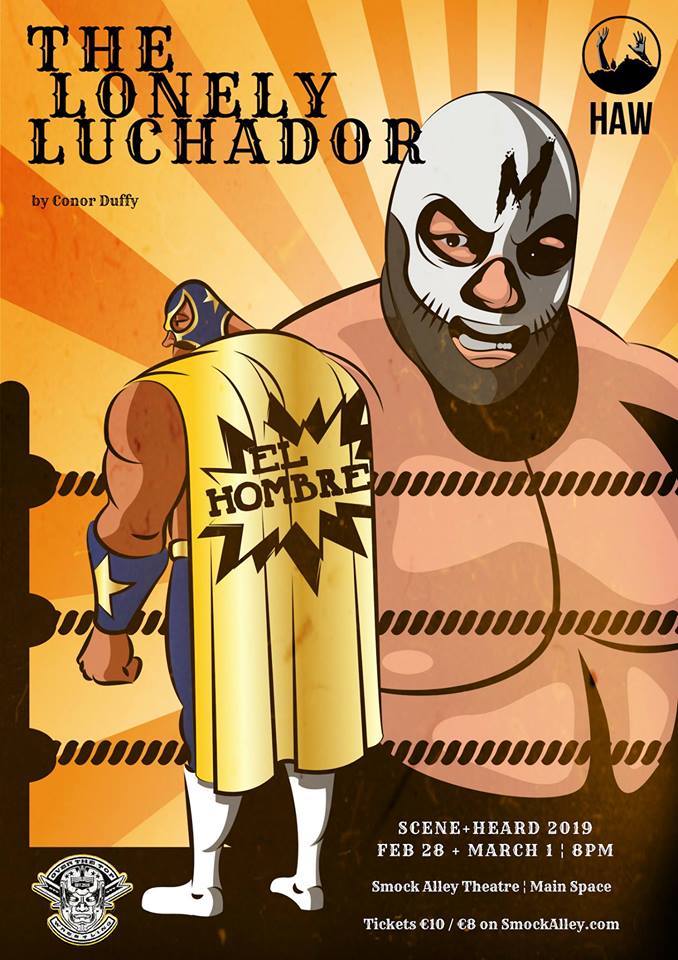 The Lonely Luchador is Head Above Water’s contribution to this year’s Scene and Heard Festival at Smock Alley Theatre. Given the chance to present a work in progress, the stage floor is open for risks, novelty and new ways of storytelling.

El Hombre, the worlds greatest wrestler, is in Mexico to compete for the Mexican Championship Wrestling Heavyweight Title. In spandex and blue face mask he is ready to rumble. Or is he? Perhaps the time come to retire? To live a gentle life in the countryside with his beautiful wife Anna Lucia (Nathalie Clément). However, his manager Dexter (Tom Doonan) and Anna Lucia  have other plans and insist on him taking on this last fight. Sure, all he has to do is take on the monster among men that is Mister Muerto. His black mask and deadliest finishing move in Combat Sports are legendary. Young, powerful and deadly Mister Muerto is El Hombre’s greatest challenge. As the two titans of wrestling come face to face, the plot unwinds in a series of twists, turns, surprises and daring feats of physical comedy that make The Lonely Luchador a festival hit.

With The Lonely Luchador Head Above Water have succeeded in their aim of bringing original theatre and physical comedy to the Dublin stage. 30 minutes of riotous fun The Lonely Luchador features sharp and precise physical comedy at its finest. Compere and referee Joe Clinton, as Earl, kicks off the performance by inviting the audience to join in with boos and cheers; to involve themselves in the play like a real wrestling audience would. This was set upon with Friday night joy by the audience; who took little persuading to cheer on the good guy. As Conor Duffy’s El Hombre and Gavan O’Connor Duffy’s Mister Muerto face off tightly choreographed physical comedy is on full display. Body slams, kicks to the face, fighting off stage in the midst of the audience, this action – packed scene is excellently coordinated to draw as much entertainment as possible from the raucous fight scene. It will turn even the disinterested into a wrestling fan for the night.

Writer, director and El Hombre Conor Duffy shines throughout; imbuing his character with just enough emotion to make the audience root for him. Clément, armed only with her sharp tongue and hand fan, manages to utilise props and accents to great effect. Rounding off the group is Tom Doonan as El Hombre’s manager: a Texan with a cowboy hat and heeled boots, he is a chancer on the make. The accents are hammy and the action fast and physical. Every opportunity is mined for laughs in this ensemble piece.

Fun from beginning to end The Lonely Luchador was a very enjoyable part of this years Scene and Heard Festival. It will be very interesting to see what Head Above Water are planning to do with this in the future. Whatever they decide, it is bound to be cracking good fun.