The Brazilian by Rosie Millard Review 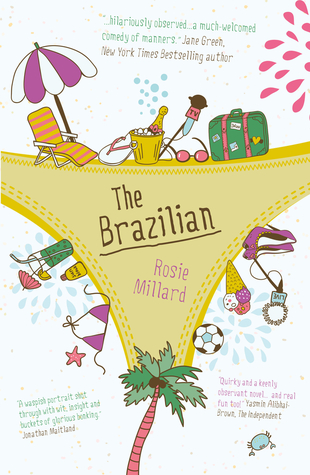 The Brazilian opens in a London beauty salon where the middle class and nearly middle aged (although she would be furious if you suggested so!) Jane is getting a Brazilian and discussing her upcoming holiday to Ibiza with the beauty technician. Jane is annoyed and perhaps slightly scandalised when she hears that the technician’s son is also going to Ibiza. Surely it was too exclusive and expensive for someone like him? This is an excellent introduction to inimitable Jane. In just a few lines one finds out what is important to her and how she likes to consider herself above others. Shortly after she has this thought: “fame and sex, thinks Jane. These things are important to her. She wants to have both of them. She has neither of them. And she’s in her forties. In a few years, she won’t be able to have either of them”. She is funny for the reader to be around, perhaps inadvertently so, but the humour that makes this novel skip along is demonstrated in the first few paragraphs.

Jane and her longsuffering – although not exactly innocent – husband Patrick, eight year old George and babysitter Belle are going on an ‘high class’ summer holiday full of family time and yoga to Ibiza. Although it becomes clear that no one really has any intention of ‘family time’. Belle for a start is planning on taking full advantage of the paid for holiday in the clubbing heartland. In order to be with her, boyfriend Jas is also on the island. He has tagged along with a cheap walking holiday so that he and Gemma can meet up when the sun goes down. This is unfortunate because Jane wants her to take charge of George while she sets out to get herself on a cheap daytime reality TV show called Ibiza (or Bust).

Ibiza (or Bust) features a group of not very famous ‘celebrities’ prepared to be followed by cameras for two weeks while taking part in a series of challenges for a few thousand pounds and exposure. Included in the group are two of Jane’s neighbours; Alan Mackin (a financial advisor of minor fame) and contemporary artist Philip. Philip’s unusual and flamboyant wife Gilda also makes a brief but valuable appearance. Will they be Jane’s way in to her reality show dreams? “It was just so unfair. Act like an arse and a show-off, like Philip Burrell does and that silly Alan Makin, who bought his way into the Square without so much as an invitation, just slapped his money down, and what happens? You get on television. Quietly get on with being sophisticated and stylish, like her, and what happens? You get ignored.”

Fellow contestant Gemma, a TV estate agent, is somewhat out of her depth on the show. Taking part in task one, a water challenge, she is scared and unsure, with the thought of the cameras always on her mind. “She walks to the edge of the pontoon. From this position, there is quite a drop to reach the water. Say, about three feet. Oh, just do it. You’ll be on telly, she thinks. Imagine her friends, her parents, her boss, seeing her unable to jump off a silly pontoon onto a silly lilo. It will be on YouTube forever. She’ll be a laughing stock if she doesn’t do it.” The behind the scenes of cheap reality TV is excellently done. It is funny from start to finish with show producer Simon providing a welcome injection of cynicism; his feet are firmly on the ground.

Each chapter is told from a different perspective which keeps the story fresh and helps to round out the narrative. The Brazilian is a fun filled satire that takes on fame, celebrity, middle class families and modern sensibilities. Anyone who likes reality TV and for those who like to complain about them or ridicule them will enjoy this aspect of the novel. Full of action and drama from the start it is difficult not to be caught up by the entertainment. Millard’s past as a journalist is reflected in her fiction writing. She picks up on the small things that tell us so much about a person and their interpersonal relationships. Jane and the Ibiza (or Bust) contestants are ripe for comedy. Characters such as George, Belle and Gemma help to soften things with their sweet hopes and kind personalities which also makes them easy to root for. Importantly each character is recognisable and although comic, not cliched.

On a small point, there were several spelling mistakes which should have been picked up before publication. The novel was otherwise very well written and paced. It got me through several days of poor health, making me laugh throughout with its clever cultural commentary. Having enjoyed The Brazilian I have since ordered Millard’s earlier work The Square which involves many of the same characters, and I look forward to her next work.