The New Theatre Fight Back 2020 Series 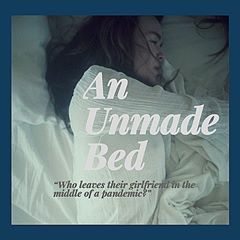 As early as April The New Theatre set out to prove that even a global pandemic will not stop new theatre from being created and enjoyed. Twelve short monologues were written and performed from the 7th to the 24th and are now available to view on takeyourseats.ie. Free to watch, the creators are hoping for donations to help them through this unprecedented time. Although watching on a screen does not have the same atmosphere as sitting in a theatre it is great that even during a time like this that there is a space for creativity. Also, for someone like myself who has often been prevented from theatre going by illness, if gives one the chance to still enjoy new productions.

Week One – One: An Unmade Bed

“Will you come back? You did before.”

A breathy voice informs us that the speaker is alone in her bed and we learn quickly enough that the bed has become her world. Her partner has left, even though Ireland is in lockdown, and she has fevered thoughts of going to find him in London. Why did he go? How can he be safe? Clouds gather outside the window and rain begins to fall.

After this introduction the speaker circles back to the heart of her relationship with the unnamed man. Their relationship seems to have been marked by arguments and promises to change. The more she wanted to be with him the more he wanted to get drunk, get high, take life as it comes. Frustrated and increasingly desperate they argue. Her anger and disgust increases, but her longing does not subside. The monologue takes us back to the start of their relationship and its key points before it broke down irretrievably. As with many relationships it is difficult to see from the outside what held them together and their separation is less surprising to the audience than to the speaker.

Moynihan makes great use of metaphor. The unmade bed becomes a boat lost at sea and surrounded by sharks. She wonders why mackerel do not avoid sharks (“haven’t they learnt anything by now”), why the prey walks into the mouth of a predator. The breathy voice continues for the rest of the piece which probably wasn’t necessary however as we quickly see how hurt she has been by his leaving and how her internal aloneness is echoed by the outside world.

These feelings are matched by the camera work and subdued colour palette; white, browns and grey. As the weather changes the bed becomes a boat, the rumpled sheets reflecting the ocean waves, her hair splayed out like foam on the beach. The cinematography perfectly complements the monologue. It would be good to know who was responsible for filming so that they could be properly credited.

The fact that the pandemic is mentioned early on is similar to many of the other productions. Perhaps even in theatre there is little hiding space and the audience must join the speaker in her bed and wait for the sharks to search elsewhere for food.